A 3-man Committee was inaugurated by the Association’s Chairman, Mr Godwin Bamgboye during a general meeting and Dr. (Mrs) Victoria Nlemigbo Esq. was announced as the Chairman.

The other members are Coach Mba who will serve as the Secretary of the Committee with Coach Gidado completing the list.

The 3-man committee, according to the provisions of their constitution was empowered for their forthcoming election.

In her acceptance speech, the experienced Legal Practitioner in football related matters promised to deliver a credible and smooth election that will be satisfactory to all the stakeholders.

She also called for support from all relevant stakeholders as she hopes to hit the ground running immediately. 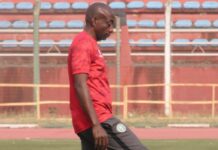 Enyimba 1-1 Niger Tornadoes: ‘It Was A Special Evening Against Enyimba’...