Emmanuel Fashemi might not be a regular face in the daily tabloid but a regular voice on radio within the Federal Capital Territory (FCT) Abuja and it environs.

Fashemi an On Air Personality and season sports journalist with Kapital FM, Abuja.

Earlier in the week, it was different story for Fashemi who’s resemblance with Plateau United head coach, Fidelis Ilechukwu has been the talk of town in and around Abuja.

The recognition for Fashemi in the last few months has been overwhelming with a lot of persons taken him for Fidelis Ilechukwu and asking if he shares the same parents with the ever exciting Plateau United head coach.

On Wednesday 26th October, 2022 at the Area 3 play ground, Abuja where Fashemi popularly called sports senator has gone to cover the Unity Preseason Tournament little did he knew that Fidelis Ilechukwu will be visiting to catch a climbs of proceeding at the tournament.

Before Ilechukwu arrival, few persons had accosted Fashemi taken him for the Plateau United gaffer and questions upon questions if he has any connection with Ilechukwu but his replies were “There is no any relation between me and Ilechukwu, it just nature and nothing else”.

“On several occasions, people asked if Fidelis Ilechukwu is my elder brother. The first time was at this same Area 3 play ground.”

“I have been to different sporting events, recently at the MKO Abiola Stadium, lots of question were asked if the former MFM FC coach is my brother.

“I posted my picture and his (Ilechukwu) on my Facebook page, people were asking if we are brothers. Here in Abuja most especially, they always miss took me for Ilechukwu.

“There is no connection whatsoever between me and Ilechukwu, it just resemblance and nothing else but am happy to be linked somehow with the ever exciting Plateau United head coach,” Fashemi concluded.

When Ilechukwu later arrived that evening, it was all smiles for Fashemi as both further cemented their familiarization and had a photo session. 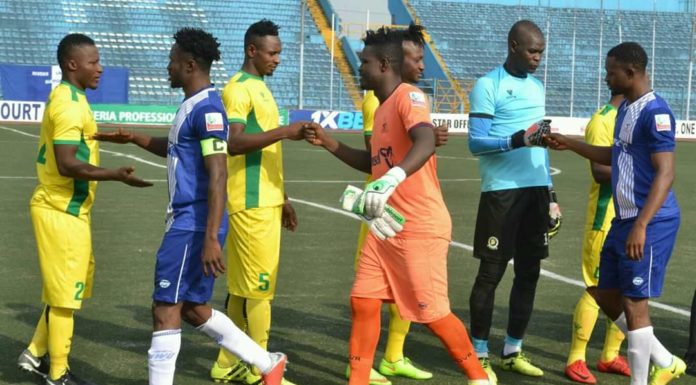