Nigeria and Tunisia will rekindle their football rivalry once again at the ongoing TotalEnergies Africa Cup of Nations tournament that is taking place in Cameroon.

The Carthage Eagles confirmed their meeting with Nigeria after failing to defeat Gambia on Thursday evening as they finish among the third best teams from the group stage.

Super Eagles on the other hand recorded a perfect outing in the group stage of the competition by winning all their matches.

Nigeria and Tunisia met on several occasions with the recent one being the international friendly that was decided in October 2020.

Super Eagles only recorded one win from their five previous meeting with Tunisia. The other four meetings ended with a draw.

It may interest you to know that both teams met in the last AFCON that was staged in Egypt but it was the Super Eagles that won the match by 1-0.

See how the two teams fared in their five previous meetings after the cut.

Going by their performance at the ongoing TotalEnergies Africa Cup of Nations tournament, I expect the Super Eagles to defeat Tunisia with a slim goal margin. 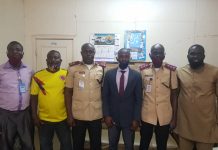