The South West Derby between Shooting Stars and Remo Stars in Ibadan ended in both teams sharing the points but the aftermath scenes where journalist were attacked has been the highlight of the game.

It was reported that journalists including CAF digital ambassador, Tobi Adepoju who were at the game were attacked after post match interviews by angry fans who claimed the referee was biased with his officiating.

Recounting scenarios from the sad events, an eye witness who wouldn’t want his name in print revealed that Shooting Stars management including the GM, Dimeji Lawal and Chairman, Honorable Babatunde Olaniyan were at the scene of the event.

“I saw them, they were seated not far away and they saw how the fan slapped Mr. Tobi Adepoju, Oganla as fondly called and chased him and the other journalist out of the stadium. They pretended like they didn’t see them.”

“It looks like they know the guy and they all planned it together to attack the journalists especially Mr. Oganla. I also think they wanted to revenge what happened in Ikenne because fans were harassing everyone that wore a Remo jersey where I seated to watch the match.” He concluded.

The reverse fixture in Ikenne also ended in a fight involving the two clubs’ fans but a peace meeting organized by the LMC settled the fracas.

Meanwhile, it was also confirmed that the away team, Remo Stars were held hostage for a few hours as their team bus’ tyre was bursted by angry fans.

The security officials at the stadium had to shoot sporadically into the air to ensure the disperse of the mobbing crowd that attacked Tobi Adepoju and other journalists. 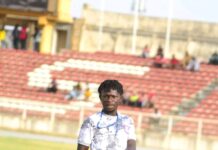 Freekick Naija - November 25, 2019
Though a match they probably could have earned the maximum points, Buffels FC attacker Alayande Abiola says he was pleased with the...