Sola shodiya is currently the rave of the moment in Malta with his two breathtaking goals during the week for his team, Hibernians fc in their 8-2 against Lija fc in the week five of the malta league.

Sola who as played for Ebonyi angels, gateway fc and enyimba fc in Nigeria before laying his boot for Birkirkara a top division team in Malta started with a grassroots team called pako dopemu in Lagos.

He joined Hibernians this season and they have since been knocked out of the Europe cup.

“I will paint Malta Ieague red with goals, I believe my time as come, with God on my side, this is my season”

He added that, his dream is to get national team selector attention.” we all play football for so many reasons, I think, one if my major target now is to do well with my club and play for Nigeria in the world cup.

Hibernians play away to zejtun Corinthians fc these weekend. 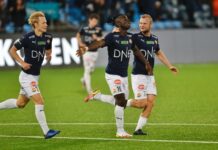