A Senator of the Federal Republic of Nigeria, Ibrahim Hassan Hadeija who is representing Jigawa North Eat in the national assembly has thumb up the good kickoff of the Nigerian under 17 team in Brazil for coming from behind twice to defeat the Hungarians 4-2 in their first group game of the FIFA U-17 World Cup tournament.

The federal lawmaker who is very passionate about Nigerian football strongly believe that the Manu Garba led side has better things to offer in all their remaining group games and qualify to the knock out stage.

Senator Hadeija made this known to newmen shortly after the game on Saturday night.

He said the Nigerian team have a good fighting spirit by coming from behind on two occasions to overpowered the Europeans side despite conceding an early goal.

He therefore urged the Technical Crew of the team not to relent in building confidence on the players going into the next game.

Golden Eaglets will tackle Ecuador on Tuesday for the second group B encounter. 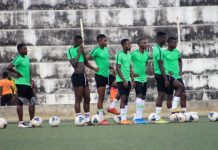