All is set for the finals of the Prof Akin Oyebode U-15 Football competition for boys and girls.

Uche Chinonso was the hero in the first semi finals as his brace was enough for Ifelodun /Irepodun to secure a place in the finals of of the prof Akin Oyebode U-15 Football competition.

In the 11th minute, Chinonso finished off with his left foot after a counter attack, he then got his brace in the 44th minute to take his goals tally to seven in the competition making him the highest goal scorer so far.

In the second semi finals on Sunday, fans favorite Ado U-15 team progressed to the finals after beating impressive Gbonyin U-15 team, 5-4 on penalties after the game ended 1-1 during regulation time.

Wasiu Abdulraheem had earlier given the Gbonyin boys the lead in the 15th minute after beating his marker to slot the ball past on rushing goalkeeper, with less than ten minutes to go, Ado boys found their way back into the game as Olatunde Olamilekan gets his name on the score sheet with a beautiful goal.

Earlier on Saturday, in the girls category, Lionsgate FC defeated Fatoba Queens Feeders 3-0 to book a place in the finals against Golden FC who pipped Osetoba Babes 3-2.

The finals of the competition is scheduled to hold this Saturday, 22nd May at the Ikole township stadium, Ikole Ekiti. Freekick Naija - January 5, 2022
Coach Austine Eguavoen and his coaching team conducted a training session for the Super Eagles team on Tuesday, taking their preparations for... 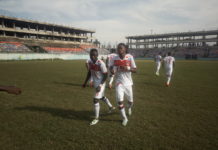