Nigerian forward Anthony Beji who plays for Albanian top division side, FK Bylis Ballsh has noted that he is putting in a lot of work in order to get the attention of some big clubs in Europe.

He stated this during a conversation on the Black Ballers Podcast, a show dedicated to stories about black footballers around the world.

Anthony who started his football career with FK Egnatia of Albania also stressed that playing in the Albanian league is not his ultimate goal.

“Every player has the ambition to play at a certain level and a particular club. I have very big ambition and I don’t want to only play here in Albania. I am working hard so that big European clubs will have their attention on me,” Anthony explained.

He currently has four goals to his credit having started six games for his club this season.

He, however, admits that he needs to score more goals and contribute to the success of his team even though he is just recovering from an injury that kept him on the sidelines for some time.

“The most important thing is for the team to win,” he said. “After the team, it is me. How I play, my performance, my goals, and assists. If the team is playing well, definitely I will play well and I will score more goals and assist.

It is left for us, the players, to play as a team not as individuals. The season is quite difficult for us because we did not start well, but I hope that I will help the team this season because I just returned to the squad after nursing an injury. I am very happy that I am performing well and I have started scoring. I hope to continue in this form and score more goals.”

So many Nigerians ply their football trade in Albania and some have gone ahead to play in other parts of Europe and feature in top European competitions.

Anthony narrates how he has been likened to Peter Olayinka who was very productive for FC Bylis and currently plays for SK Slavia Prague.“In my team, FK FK Bylis they call me the new Olayinka. Perhaps they see that the force and the energy I bring and the direction I am going is similar to that of Peter Olayinka. But I am just being myself, not any other person and I want to want to reach his level because obviously, his level is high now. I just want to keep working hard and step by step we would see what happens.”

Before Anthony started his professional career in Albania, he had the opportunity to try out at FC Luzern in Switzerland. Unfortunately, the deal was not successful. However, he still admires the Swiss club and is hoping to feature for FC Luzern if another opportunity comes.

“I really want to play in Switzerland again,” Anthony admits.

“I really enjoyed my stay in Switzerland and football there is very good because it is at a professional level and very tactical. I believe it suits my style of football because I have been there and I want to play there again.”

Anthony’s club occupies the 8th position after 12 rounds of games in the Kategoria Superiore.

He scored in their last outing despite losing away from home. Their next game in the championship will be against FK Tirana. Freekick Naija - June 16, 2021
By Gbenga Adeleye Towards having a vibrant grassroot sports development in the State, the... 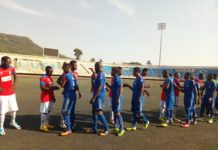