The former Highlanders FC of Kaduna player who spoke to FreeKickNaija.com.ng moments after the encounter described the game as tricky due to some factor which he elected not to disclose to the press in details.

He said it was a game they would have nicked a point but they were denied the opportunity. “The game was difficult and tricky but we thank God for injury free game. I have to be honest, we are really not happy with how thing turned out but the officials know better we just have to forget the past and prepare for our next match.” Usman Set for the taking over of Katsina United 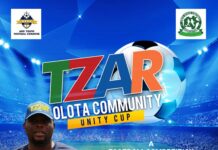